Destacamos
* Plaza Mayor is the heart of Hapsburg Madrid. Arco de Cuchilleros, Casa de la Panadería and the Statue of Felipe III mark this square charm.
* Puerta de Alcalá is one of the five ancient royal gates that gave access to Madrid. Its Neo-classical and three archs appearance remind of the Roman Triumphal Archs.
* The Temple of Debod was a gift from Egypt to Spain for its help to save temples located in Nubia. The sunsets from this Egyptian temple are hypnotist.
Descrizione
Explore the city in comfort aboard one of our double-decker buses. Discover Madrid in detail with a single ticket. Hop-on and hop-off our buses as many times as you wish and enjoy the city at your own pace.

The route 1 (blue) will take you to discover the Historical Madrid. This itinerary includes a complete historical, artistic and monumental circuit in which you will visit several landmarks of the city. Go across the beautiful Paseo del Prado or admire magnificent buildings legacy of the Habsburgs period. Go to the Golden Triangle of Art and take the opportunity to explore one of its museums in depth. From the Royal Palace to the Temple of Debod, sit back and enjoy the views over the city.

The route 2 (green) goes through the Modern Madrid. Discover the city beyond the historical famous landmarks and the monuments to royalty. From Atocha to Nuevos Ministerios and from the symbolic Puerta de Alcalá to Puerta del Sol. Admire the most impressive contemporary works of the Spanish capital. The itinerary will take you close to the impressive KIO towers, the Museum of Public Art and the Real Madrid stadium. Uncover the life, art and new traditions of the city inhabitants with this itinerary.

You will receive a map with all relevant information on the service and the stops, as well as a discounts booklet for several shops and restaurants in the city. The frequency of the service varies depending on season. Route 1 lasts for about 80 min and Route 2 lasts about 65 minutes. 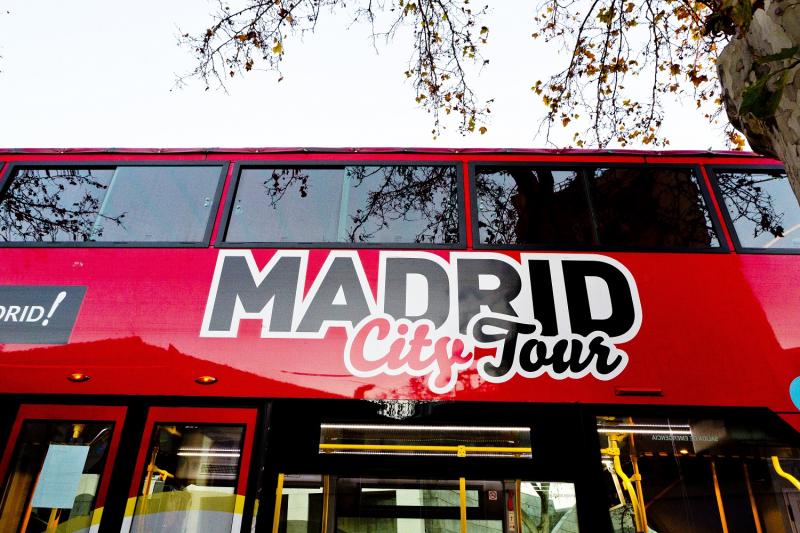 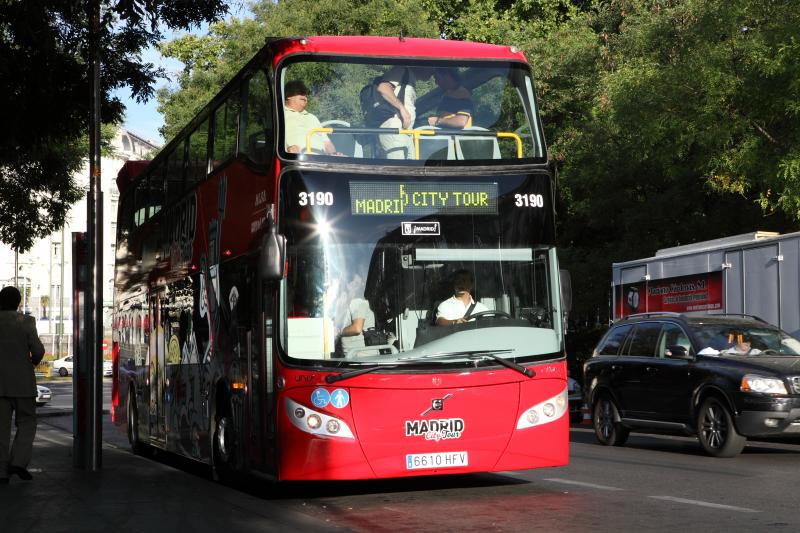 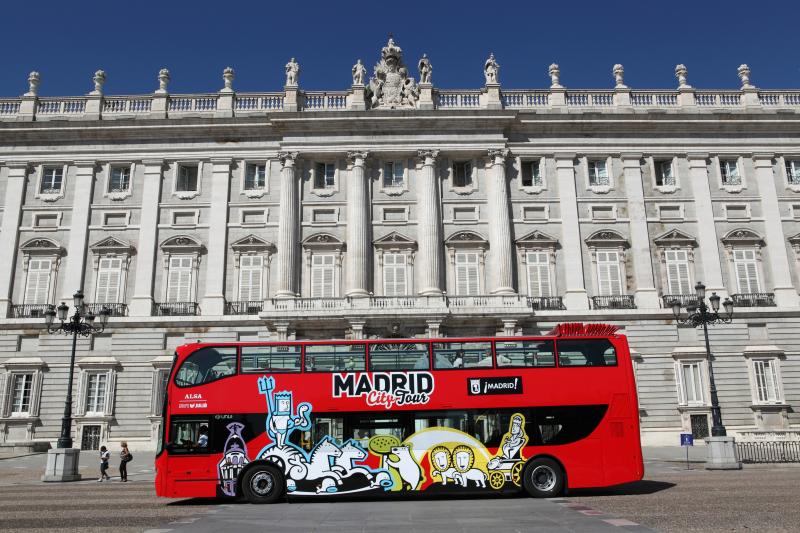 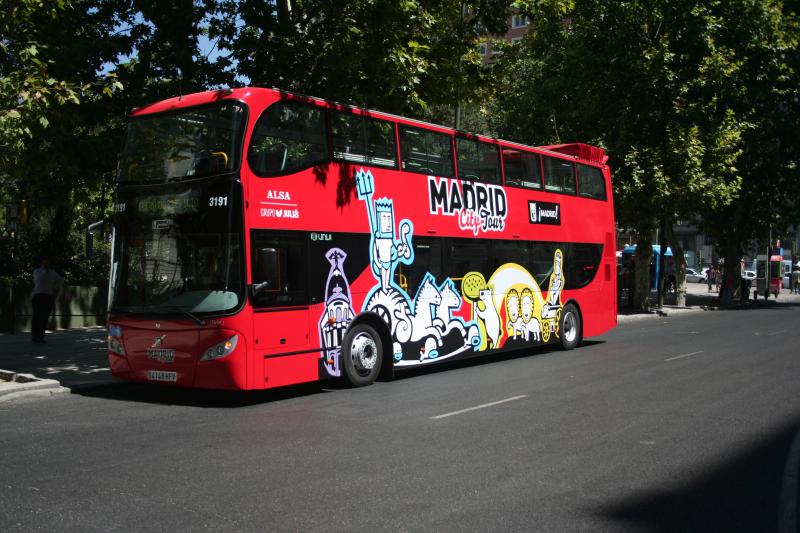 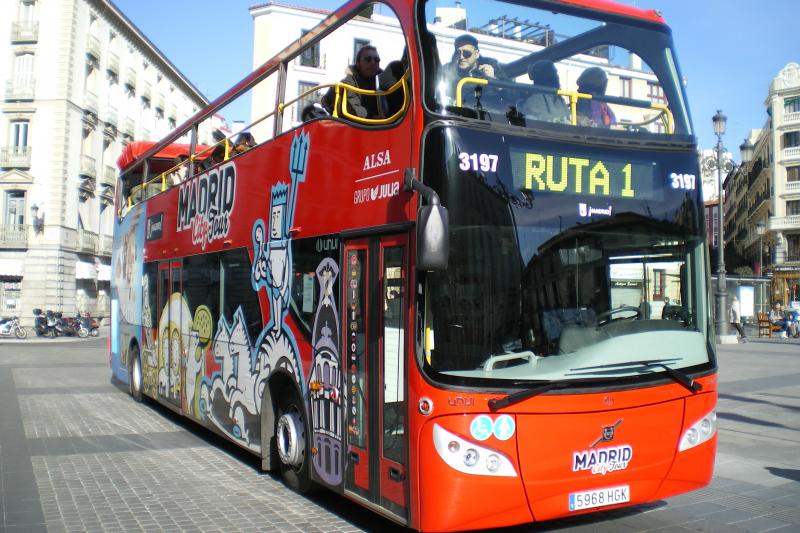 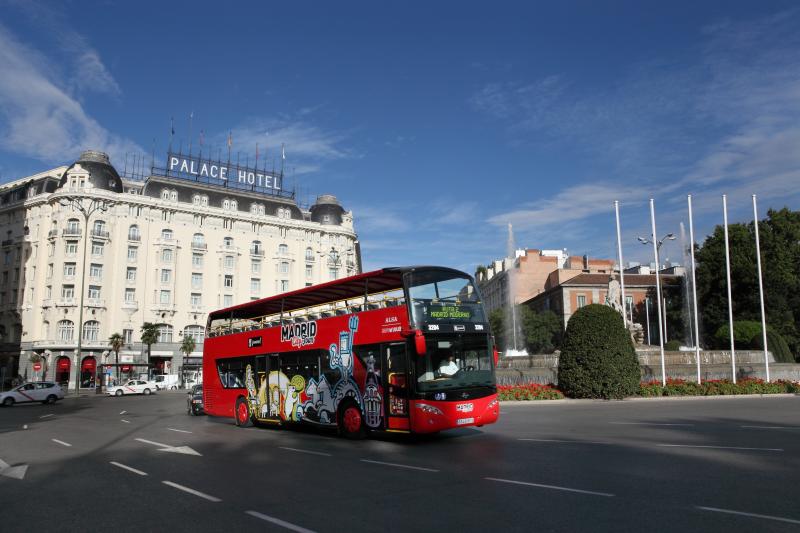 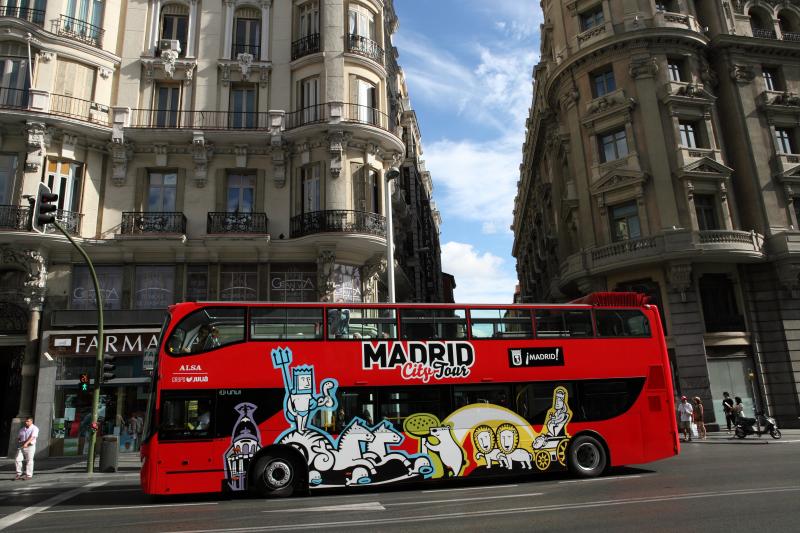 ficha_adicional
* The Madrid City Tour Bus runs from 09.00 to 22.00 between March and October, and 10.00 to 18.00 between November and February.
* Route 1 departs and ends at Prado Museum and is 80 minutes long approx. Route 2 starts and ends at Plaza Neptuno and is 65 minutes long approx.
* Frequency: daily every 7- 15 min depending of season.
* Audio system is available in 14 languages: Spanish, Catalan, Gallego, Euskera, English, French, German, Italian, Portuguese, Dutch, Russian, Chinese, Arabic and Japanese. Kids’ Channel available in English and Spanish.
* You can begin your hop-on hop-off tour at any of the Madrid City Tour stops by showing your voucher when getting on board.
* Printed voucher and E-voucher are accepted

Show your footballer spirit at the Real Madrid stadium. Go across its trophies and facilities in a unique visit and without waiting

Go back in time and let yourself be amazed by the Walls of Ávila and the aqueduct of Segovia. Two magical and full of history cities

Due to current international events, tickets are not purchasable for the next few weeks